A family member handed this basic corner shelf down to me this summer, she said they’ve had it for yeeeaaars. I’m not too sure how long but it’s in great condition to have survived moves, children…. And well time! I was happy to take it off of her hands!

Here she be all taken apart 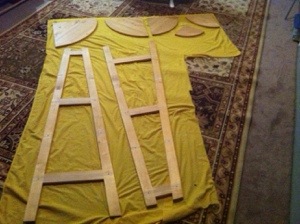 I decided to try out a chalk paint recipe since we had our first sticking snow this past week I wasn’t all about taking it outside to sand! So I mixed up some paint, plaster of Paris and water and put it to work. It turned out great, went on smooth and distressed like a dream! I wouldn’t use it for everything but it’s definitely a nice option to have! 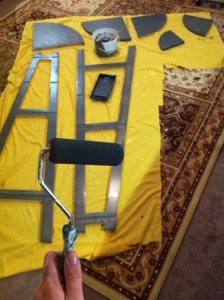 I did a couple of coats with the paint, let it dry for 24 hrs and lightly distressed it then finished it with a clear coat of Minwax Polycrylic. I’m not obsessed with the poly, I always end up with an uneven sheen and have to spend time sanding it down to even it out. I’m anxious to get my hands onto wax and figure that out, but for now, this works!
Here’s the finished product. Doesn’t it look so good! The deep grey is just so warm and chic. I don’t know if chic is the proper word for furniture but it just is! At he same time it could be totally masculine. Super versatile 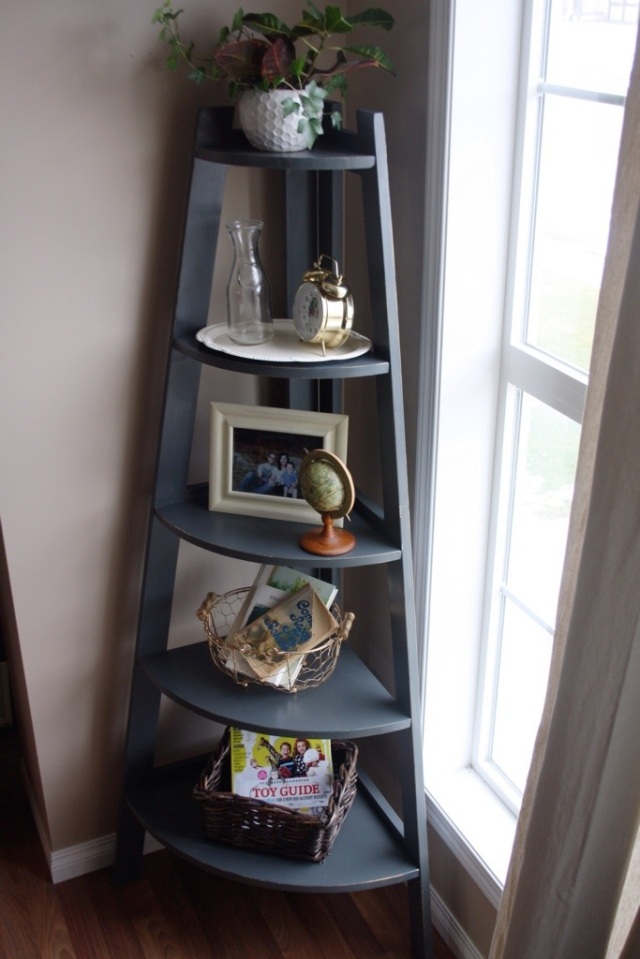 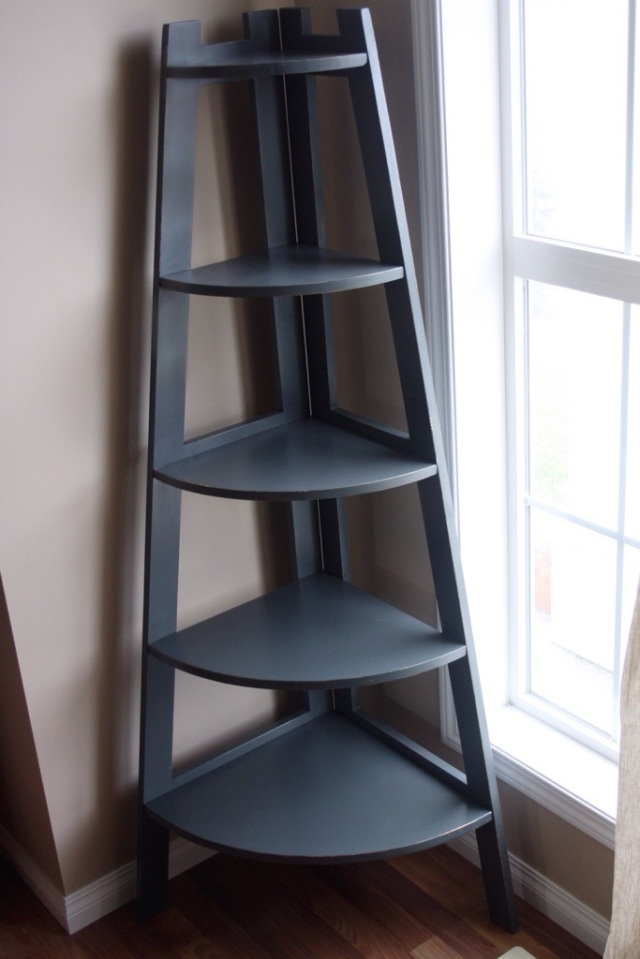 My next project that has been waiting in the wings was this beautiful oval table that was given to me.  The people who gave it to me lent it out and received it back in what they believed to be as terrible condition.  Sure it was a little scuffed up, but totally sturdy, beautiful shape and just…. glowing with promise! 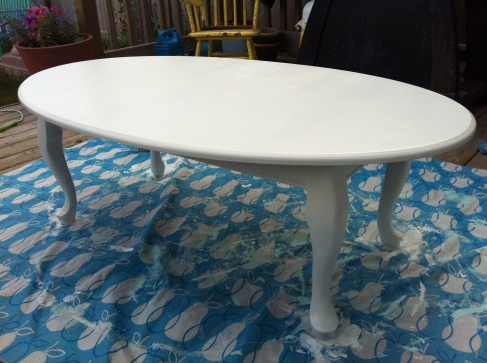 I wanted to do something special with this table… well cuz really, it’s less scary to experiment with free! Am I right!?  So after a bit of thought I figured I’d try my hand at using a stencil.  So in I walked to Michaels thinking “this shouldn’t be very hard”.  I had an idea of what I wanted my stencil to look like.  So in my mind it was just a matter of finding it.  But really, I wasn’t being honest with myself, we all know how Michael’s works.  Too many options of all the same thing, making a shopping trip for one thing turn into an hour long hmming and hawing session.

Once I settled on the stencil, I went home and got to work…. at of course 9pm at night when the kiddies are in bed.  I mixed two colors to dull down the mint as I wanted it to really blend with the white, then cracked open my stencil.  Let me just say, I went with the cheaper option of stencil, over the Martha Stewart ones that have adhesive on them.  I wish I would’ve spent the extra money because this bad boy was a PAIN!  But what’s done is done and I was determined to make it work!  (And how lovely that it came in two pieces… NOT!)

When I started with the stencil I didn’t think of how long it would take me, but let’s just say, I didn’t finish until around 12:30am.  I was too afraid to step away from it, especially since I mixed paint colors, I didn’t want to risk it drying out and having to guess what amounts of each I used to recreate the color.  Newb mistake!

I finished the table by distressing some of the top and around the legs and edges and applying a clear coat of Minwax Polycrylic .  I love how subtle the damask stencil is on the crisp white, I wish I could keep it because I obviously have a mint obsession!  I’m vowing to take a break from mint for the next few projects unless I’m asked to do it for someone else.  I just love it!

Here are some finished pictures of the beauty! 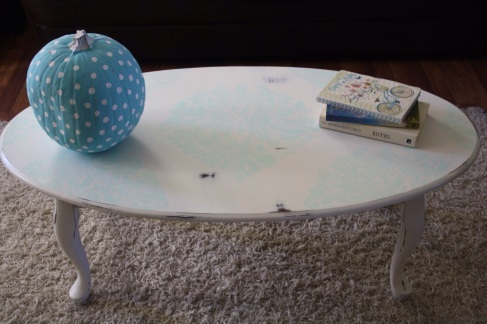 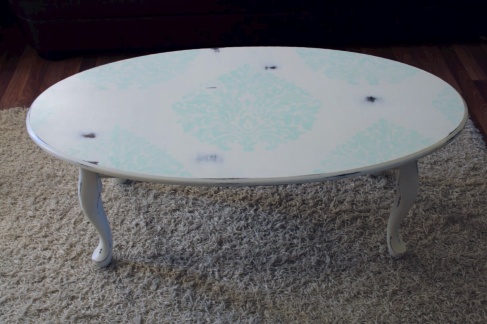 Just under 3 years ago we discovered that our classy looking bar height table was not the most toddler friendly after our 1 year old fell off the high, but oh so chic chairs.  So we posted that bad boy on kijiji and began looking for something a little more… or should I say…. a little less dangerous for our adventurous little toddler.  I began my hunt on kijiji to replace said table, and had found a couple options for a decent price that I was interested in, so of course I emailed them and awaited their response.

Oh did I fail to mention, that somehow… I still don’t know how this happened, but I managed to delete the browser off of my phone.  I know, I know I could just get a new one… I just hadn’t at that point… and still don’t have one for that matter… but because of this, I can’t open links from my email or links that are sent to me in a text.  It’s super annoying… but obviously not annoying enough to fix.  Anyways, don’t get my hubby going about this!

So I heard back from a couple of the people selling tables that I was interested in and I began talking more seriously to the person selling the table that I thought was the perfect, safe addition to our home.  We emailed back and forth, settled on a price and then one night, I sent my hubby who was in no way involved in any of the decision making regarding the table to go pick up the table.  Cue my amazing hub-a-lub walking into the house like my knight in shining armor with two chairs over his shoulder, and then asks for my help to get the table and the rest of the chairs inside.

This table was destined to be in our lives.  We talked about trying to take it back, but decided that was so unfair to those people, then we tried to sell it for what we bought it for… no way someone would be so dumb to buy it for what we bought it for… I cried a little… ya i did… over a silly table.  But over the past two years I began to build up an idea of “what could this table be?”  And when the summer hit I was determined to attempt to find the beauty in this beast!

It was a big conquest but, I did it.  I sanded down 4/6 of those chairs, spindles and all…  I primed and painted, and clear coated and sanded and left it out in the rain and resanded and repainted… and at the end of the day, it’s far from perfect, it was definitely a learning project but I concluded that I hated it to begin with so if I can enjoy it just a little more then that’s a win.  And I gotta say, I’m happy I did it!  Here are a couple pics! 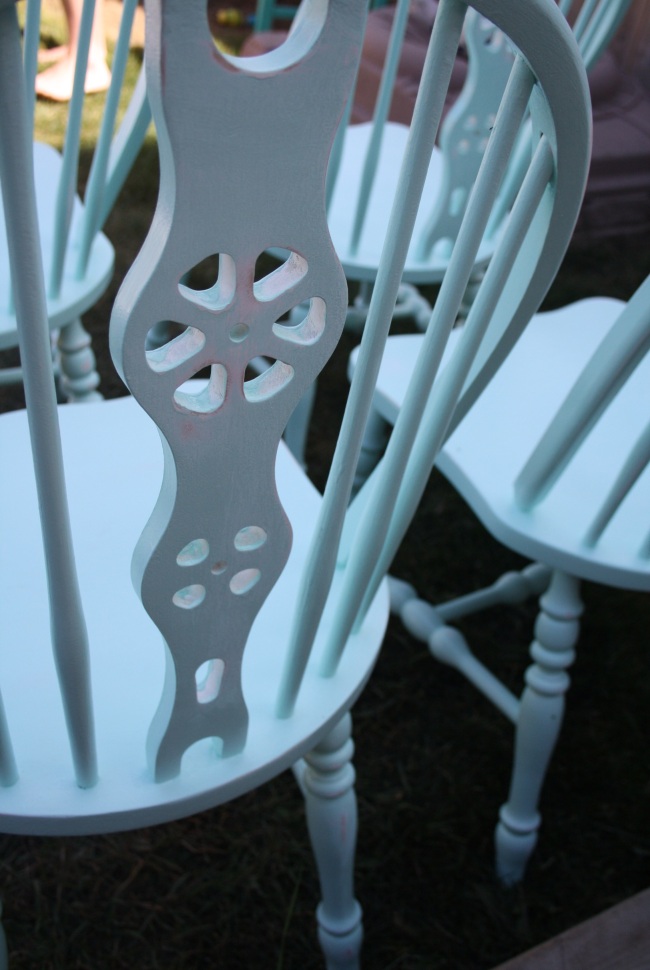 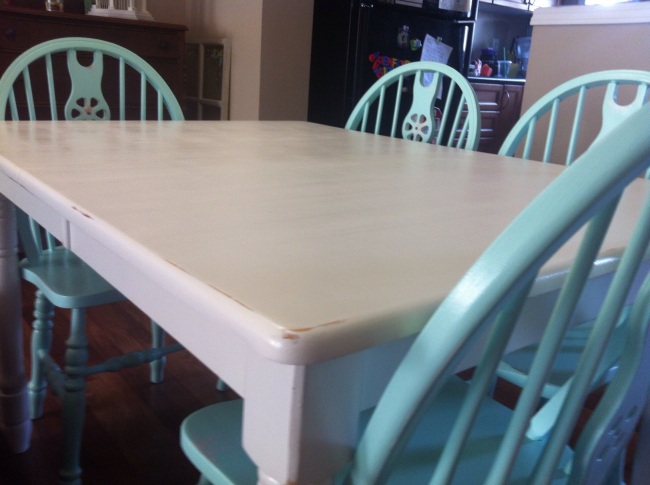 A month or so ago a family friend gave me these beautiful tables that she just had sitting in her basement so of course I took them off of her hands! I’ve been wanting to get more practice painting, and refinishing furniture and what better way to try it out than with free furniture! It also helps that we have family who own a paint store so the discount makes experimenting a lot easier and more fun!

A thought that’s been floating around in my head lately is “if it’s worth dreaming then it should be worth the risk.” I know painting some furniture isn’t really a huge risk, but there are dreams floating around in my head that make the small risk of practise painting some furniture a step towards making dreams reality. It’s exciting and terrifying, but fear of failing or not trying because it’s scary isn’t an option anymore… Life is just too short to let fear stop me.

So back to the tables

here are the beauties. I love anything with pretty curved legs, it just adds so much character! Being a mama of two busy boys, these sat around in my basement while I dreamed up what kind of facelift they would get!

I’m on the chevron bandwagon, I want everything to be either minty/turquoise or have a chevron print on it… I’ve learned though, it’s one thing to love chevron, it’s another to create it! It’s not easy friends! So out came the Frog Tape and tape measure and voila! (I posted this photo and had quite a few people thinking I painted a green chevron on the tables…. Lol, I’m not that out there people!)

Then the moment of truth… I had never used frog tape, but I just gotta say, A-MAZING! Look at these sharp lines! I’m sold!

Then of course, I needed to rough up all those sharp lines and smooth paint! I’ve had a small amount of experience with distressing furniture, but like I said, I am learning! I was so nervous to break out my sander. I used my electric sander (a Dremel with a sanding attachment). I love it because it has 10 different settings so for nervous distressers like me you can start out slooooow. I definitely felt like an artist when I was distressing these tables. I just wanted it to be perfect: not too distressed, but not plain looking. I was kind of freaking out thinking that I did too much, but after I took a few hours away and came back IN LOVE!

Here’s le produit fini! (You may notice on the table on the left under the tabletop two yellow marks, I filled a couple holes and have yet to paint over… Just thought I’d fill everyone in incase you were wondering!) 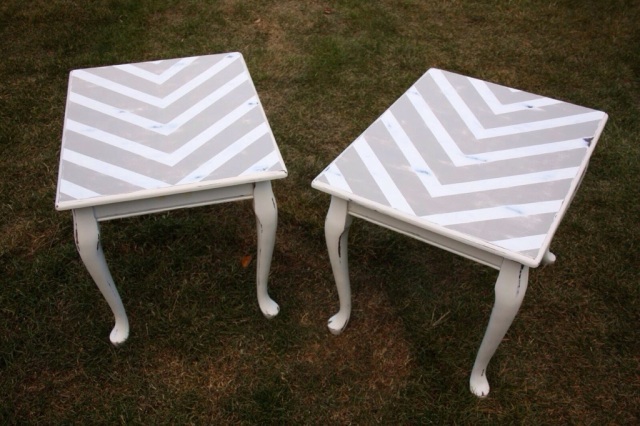